Yesterday evening we made a real start with Holacracy, a method for running your organization. Holacracy is a method of both getting work done and governing how to get that work done. It is a giant leap from a traditional hierarchical control model. With my group of partners we decided to adopt Holacracy because we are equals. Nobody among us is the CEO, manager or whatnot. We all work as contractors in a private practice and have to keep food on the table individually. We do work together though. We forward each other leads and get commissions, share knowledge and have a great team of administrative talents working for us. Each of us is working as an Agile consultant, so we are all eager for working with new methods. After reading the book on Holacracy by Brian Robertson, I got enthusiastic and convinced the rest to check it out. After some introductions and trips past other companies, we have now officially launched! This blog post talks about the very fulfilling experience we had yesterday.

We started the evening with our Governance session, the Holacracy meeting in which you determine Roles, their Purpose and which Accountabilities they have. I will give a brief intro below, but you can read more about the governance session  on the Holacracy website. Before the session we had set up Glassfrog, the tool HolacracyOne builds and advocates.

We started off real clumsy, but had a good laugh about it anyway. Frank had set up Glassfrog and as initiator had requested to be the Lead Link for our Holacracy adventure. The Lead Link is responsible for finding people to fill Roles. It is a pretty serious responsibility, but we figured Frank would fit the bill. We all accepted, so he set up Glassfrog that way. When the Governance session started, we realized we had not filled the other 2 mandatory roles in Holacracy: the Facilitator and the Secretary. The Secretary was decided quickly, Tiemen was at the computer and he was ok with it. Choosing a Facilitator was another matter. As we are all coaches and such a few of us wanted to try our hand at this. So finally we had three candidates, myself, Wendell and Frank. A round of voting was done and Frank got a few more votes than me. I would have liked the role and am an experienced facilitator in other capacities. I must admit I was disappointed, but hey: that’s voting for you. The Secretary, Tiemen, then went on to register the decision in Glassfrog and was rejected. Glassfrog reported that the Facilitator and the Lead Link could not be the same person. After a round of laughs, the decision was quickly unanimous and to my relief I was chosen as Facilitator.

Looking back at that decision by Glassfrog to not allow those 2 roles together, I think I actually understand. The Lead Link is responsible for “who fills what role”. If the Lead Link is then also the person chosen in other official capacities you can wind up with conflicts of interests. In a worst case scenario the Facilitator can start guiding the sessions to his own interests. If that happens you can better have a dictator in charge. At least that is open and visible.

What is a Governance session? 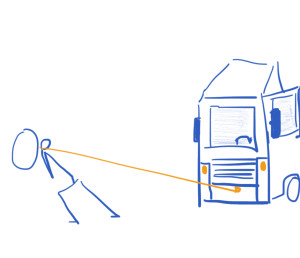 A Governance session takes as input “Tensions” and together you work them into
Roles, Purposes and Accountabilities. A Tension is described by Holacracy as: the difference between how it is and how you would like it to be. Imagine a rope gaining tension and then pulling you forward based on that tension. The format of working through a Tension is as follows:

Now this format explicitly does not state discussion. All communication is in one direction. So in each round either the owner of the Tension talks or the others talk. The reasoning behind that is that the session is only to accept proposals for organizational experiments. The format is therefore completely aimed at getting proposals accepted. Each solution to a Tension is an experiment to try. It will last for the duration between this Governance session and the next. At the next Governance session someone else can bring a Tension to enhance the proposal even further.

As a facilitator I must admit it was great to see us (myself included) struggle with the format. One partner voiced a Tension to create a Role (Step 1), that got quite a few questions (Step 2) and then some negative reactions (Step 3). The owner of the Tension had gotten so much feedback at that point that he was done with it and wanted to withdraw the proposal. The question arose however: has your Tension been taken care of? He was a little perplexed and realized: no, if I withdraw this proposal my Tension is not gone. We agreed together to continue processing the proposal. It fixed a problem for him and if anyone had an objection, they could voice it in Step 5. 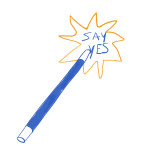 To me this was a magical moment. In any other form of discussion session, the feedback and questions would have stopped the proposal from going through. The owner of the Tension would have been fed up and would from then on live with his frustration,  knowing that others also had a slightly different opinion. Nothing would have changed even though we didn’t know what the effect of the change would be. One of our own would have been silenced and we would probably not talk about it again. Instead of that, we now have a change! The owner of the Tension has been satisfied, his proposal went through. If there are others who think the defined Role needs changing, they will come up with their Tensions. The system and our cooperation will settle itself slowly into a state that everyone accepts and can work with.

We had a few other great experiences, but I’ll write about those at a later stage. After working for a little over 2 hours we stopped our Governance session. We were not done, but time was up. We decided to do this again real quickly because we still have a lot to do. Instead of in 4 weeks, we are meeting again in 2. I have a little reading up to do before then. My role as Facilitator is great, but it is challenging. Guiding our team through the process is hard, but very fulfilling. More updates soon!

Comment6 | Share | Tweet | Share | print | email
Categories: Facilitation, The teal organization
Disclosure of Material Connection: Some of the links in the post above are “affiliate links.” This means if you click on the link and purchase the item, I will receive an affiliate commission. Regardless, I only recommend products or services I use personally and believe will add value to my readers. I am disclosing this in accordance with the Federal Trade Commission’s 16 CFR, Part 255: “Guides Concerning the Use of Endorsements and Testimonials in Advertising.”

6 thoughts on “Getting started with Holacracy”