Last week I wrote about the issues I have with authority. This week I have been doing research into the topic. My research led me into anarchism as a potential solution. I never considered it, but it seems quite attractive!

I began the week by investigating how to learn about authority. I asked two of the psychologists I know. I got a few very good pointers and then combined that with my own googling. The first pointer was to investigate the Milgram experiments. It turned out to be a golden tip.

Stanley Milgram was an American psychologist at the Yale University. In 1961 the German war criminal Eichmann was on trial. Milgram asked himself and his associates the question: can we blame Eichmann or was he merely an accomplice to the authority of Hitler? Milgram started an experiment that is still remembered today.

The experiment was held in the following manner. A test subject would be testing an actor on his knowledge of word pairs. The subject would have to give a jolt of electricity to the actor in case of failure. Each time the actor got the word pair wrong, the voltage would be increased. If the subject increased the voltage dial to “Danger: Severe Shock” and shocked three times, the experiment would be considered a success.

Please keep in mind, this was a controlled experiment. The subject did not know the actor was indeed an actor. The actor was not electrified at all. He was behind a wall and played a tape with increasingly painful screams. 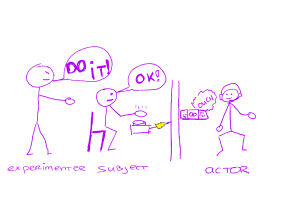 So why was this an experiment on authority? It was not the idea of the subject himself to shock the actor. Instructions to do so were coming from someone leading the experiment. The experimenter would start out by talking to both actor and test subject. The subject would be led to believe he was randomly given the role of shocker. He would then be shocked himself with a real machine, to experience how much the smallest electrical shock would hurt. After that the actor would disappear behind the wall. The test setup was now complete and the testing of word pairs and the shocking would begin.

2/3 of all participants in the first experiment passed the test. This means that out of 42 people, 28 of them were willing to inflict serious harm. They would hurt another human being at the command of someone in an authority position. They would go in against their own instincts at someone’s command.

Where to go from there? The concept of authority is apparently problematic to human beings. What would happen if we go extreme and ban authority altogether? It has been proposed before, it’s called anarchism.

In defense of Anarchism

I honestly never thought I would contemplate this. I’ve always automatically considered anarchism a bad idea. I love leading an ordered life. On the other hand, if I want to change something, I must also consider radical stances. I did some searching and found another interesting read: In Defense of Anarchism, by Philosophy professor Robert Paul Wolff. Wolff was, at the time, a convinced follower of democracy and set out to find a solid justification for it. In the process he was forced to abandon that line of thinking as he could not find any.

Wolff reasons about anarchism in 3 phases. The first is a definition of authority and the state. He goes on to define autonomy and concludes by reasoning that the two cannot be combined properly. Wolffs essay is excellent and very readable. I will try to summarize it, which will lose some of the strength of the essay for the sake of quicker reading.

Wolff starts with the definition of authority. He defines authority as the right to command and be obeyed. In contrast, power is the ability to command and thus be obeyed. Someone can command you at gunpoint and then has the ability to command your actions. That is quite different from a police officer directing you to follow his instructions. You follow those instructions believing them to be in your own best interest. Someone can therefore only have authority over me, if I choose to give him that right. 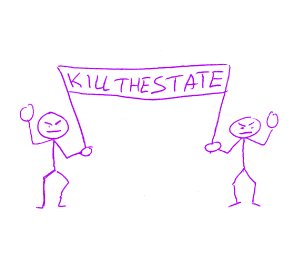 Finally Wolff concludes with the clash between authority and autonomy. If man is responsible for his own choices and actions, he cannot let someone else dictate them. He can go along with someone because he agrees with their reasoning. He cannot however obey someone without understanding why he was given an order. Authority is therefore not compatible with autonomy. Wolff summarizes that we should never give someone else authority and that anarchism is the only real option.

Wolffs reasoning is excellent and I must say quite compelling. I personally feel responsible for my choices. I would love nothing more than to have that always be true. So does that mean that anarchism is the way to go?

I see a real problem with Wolffs reasoning however. The problem is one of connectedness and scale. In relative isolation, it is rather easy to live a life of pure autonomy. If I were to live on the north pole, I could make my own choices. No one else would be closely impacted by my choices. Now I personally don’t like isolation, so I choose to live where I live. This does mean that I interact with many others in ways I sometimes don’t even realize.

Say that I am late for an important meeting. At that point I may choose to drive faster than the speed limit.  I consider the risks that I take with everyone on the road. I decide that I will not endanger anyone directly and that I may actually get there on time. What I don’t know however is that someone else may live next to the highway and go nuts from the noise. I did not consider the impact on him, should I have? 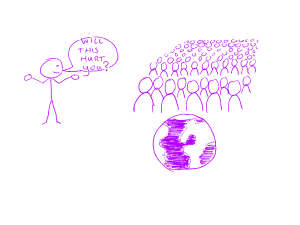 We are all connected these days, in so many more ways than we can even imagine. We impact each other daily even without knowing it. Besides that, there are 7.3 billion people on this planet. I cannot ask each of them how they feel about my clothing, my driving, the way I spend my money etc. I would never make a choice in my life if I had to contemplate all that.

How we organize ourselves

We have come up with a set of shared rules for our behavior. Those rules prevent us from impacting each other too much. We call them laws. Laws dictate what I cannot do and what I have the freedom to do. They provide a balance between my autonomy and the right to autonomy of everyone else.

Luckily I personally don’t see the lines that often. Authority goes out of my way in my daily life. The police are there to guard the lines of our laws. If I stay within the lines, I am not in trouble with them. The democratic system that decides on the laws is not in my face all the time. They change the system gradually so that I can get used to the changes slowly. The military is guarding our borders, I don’t live near those.

How different is it in corporations. I have a hierarchical manager who decides what I can and cannot do. It is not written down and it changes based on the urgency of the day. If I have a good idea that requires money or time, I have to ask him. If the company requires me to be in a different team, there I go. If I think I have done something exceptional, I have to ask my manager for a raise. I am confronted with authority every day in corporate life.

Should we model companies more like the government? Can we? Governments change slowly, companies need more and more agility. There is at least part of an answer there. It is not a direct substitution, but maybe we can loan some.

I am now convinced I want my autonomy. I want to be responsible for my choices. I want to use my skills and knowledge as best I can. Unfortunately, I am also convinced I cannot have autonomy all the way. To have complete autonomy in a normal company these days, I would have to be CEO. That would still mean that there are many people not completely autonomous. On top of that, a CEO is always accountable to someone else. Complete autonomy therefore does not work. What does? I am still frustrated enough to continue my search. What do you think works? Where is this search going?

Update: please check out the final post in this trilogy: rules for commanding

Comment5 | Share | Tweet | Share | print | email
Category: Leadership challenge
Disclosure of Material Connection: Some of the links in the post above are “affiliate links.” This means if you click on the link and purchase the item, I will receive an affiliate commission. Regardless, I only recommend products or services I use personally and believe will add value to my readers. I am disclosing this in accordance with the Federal Trade Commission’s 16 CFR, Part 255: “Guides Concerning the Use of Endorsements and Testimonials in Advertising.”

5 thoughts on “My issues with authority (2 of 3): time for anarchism!”