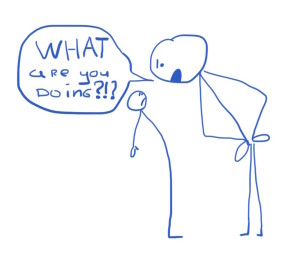 The first rule of authoritative conduct was a relative easy discovery for me. The situation was clear and the rule flowed from it naturally. This time I attempted a harder situation, curious to hear what you think about the rule I draw from it. I am taking my inspiration from how a good teacher handles authority in his/her class.

Before I go into the situation I’d like to describe what I personally hope to be able to use these rules for. I’m trying to define rules very specifically about authority to know when I should use authority. I’m doing that, so that I can act in a less threatening way in all other situations. There are 3 things I hope these rules will solve. First off, I won’t have to feel bad about throwing around my weight in the cases where authority is warranted. I am 2.05m (6ft 7in) tall and weigh in at 104 kilograms. That’s quite a lot of weight to throw around, so I want to use it sparingly. 😅 I also want to feel comfortable about it afterwards, knowing I did the right thing. Secondly, I won’t need to hesitate too long. I can use authority directly where being friendly and open is really counter productive. Thirdly, having these rules with a bunch of tips around them, also helps in having a discussion about it afterwards.

The situation I have in mind while writing this, is the situation of a teacher in a classroom. I’ve been in classes and have had varying qualities of teachers. There were teachers who had no authority over the class at all and also didn’t need it. I remember a history teacher, who mesmerized us with great stories. We were all completely silent and really interested because of the way he told about Egyptians, Romans, etc. There were also teachers who were strict, but where we didn’t mind it too much. You were expected to behave and pay attention, but it was clear that the teacher was only strict so that the class had the most effect. Then there were teachers who had no authority whatsoever and also didn’t captivate us at all. I remember a teacher actually being bullied by the class and walking out frustrated. This teacher didn’t use authority in a proper way and things got out of hand real bad. Each teacher used authority in a different manner, in many cases productively. The use of authority over teenagers wasn’t necessarily bad therefore. In some classes we felt the calm of a good leader. What then, is the truly legitimate use of authority in these cases? When must we use authority with each other?

Now on the other hand in some situations authority was abused by teachers. The teacher that was being bullied, started to explode for even the simplest things. If a student was not sitting up correctly he would put him straight. This overactive use of authority was unnecessary and only hurt his position in front of the class. Students would rebel against his use of authority as he also used it unjustly. Even the commands he gave that should have been followed were then ignored or contested.

In thinking about a rule to create for the authority used by a teacher, let’s first set some context. First off, we are talking about behavior in a group. The teacher has no special authority outside of his classroom. Secondly, the students are all there together for a reason. They may not have chosen this specific class, but they all come there to learn. A common goal is therefore also a key situational element.

Now to get to the elements needed for proper use of authority. The strict teacher the group was ok with, didn’t abuse his authority. So when did he really use authority? To start, he used his authority to stop students who were threatening the goal of the class. Let me illustrate by giving you a quick story. 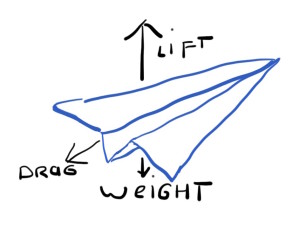 There was one time where a student threw a paper airplane across the room. The teacher was talking about the speed with which matter was falling. He laughed and asked us all to make 1 paper airplane and we had 5 minutes of fun. He resumed however with an explanation of why some planes flew better than others. The paper plane had been fun and was actually not a threat to the lesson itself, it was a good way to explain the topic.

In the next few weeks, it would happen that a student would throw a paper plane across the room. The teacher would quickly snap back to the subject of drag and air resistance, but ask the student to stop with the paper plane anyway. If the behavior persisted, he would be strict and you would immediately know that he was not to be messed with.

Looking back, I think the teacher was verifying whether the student was truly willfully trying to sabotage the class. When students couldn’t keep up with his lessons he would not correct forcefully. He would help them along quickly by taking a small sidetrack. Or he would tell them he would get back with them later. He really only corrected you when you were actually willfully threatening the lesson.

The rule I take from all this is the following:

Dealing with the rule

Now as the person in front of the group, it is up to you to decide if each of these criteria are really met. An individual interrupting your presentation, workshop or discussion may have the best intentions. He could simply not understand and want more clarification. Another person might just be in the wrong place at all. If this person does not subscribe to your goal, ask them to leave. Or make sure that it is clear that you are all there for the same reason.

Dealing with a situation like this is hard, because you are in a group. Nobody likes to be corrected in front of others. We don’t want to seem incompetent after all. With that in mind, I always try the gentler approaches first. Only if there is a real indication that someone is up to foul play, do I want to correct them. Ask questions around these topics to determine whether to speak up:

With this rule it is really up to your judgement in that one moment. It can help to discuss these points with the person in question afterwards. They may feel especially violated as there is a complete group watching. Also, if you misunderstand their intentions, you can do serious damage to your relationship. Be cautious, but do speak up if necessary. Not correcting someone makes the behavior acceptable to the entire group. Are you OK with that?

Now I started with a situation from a teachers perspective. You may not be a teacher or leader at all. Moreover, there may be no leader at all. Is it only the teachers responsibility to use authority in this situation? Should you wait for someone in a hierarchical position to do something? What do you think, will you speak up?

My plan is to take a look at more authoritative jobs and try to derive rules from them. Let me know if you are still happily reading or if you have an idea for a twist. Also, sharing is always appreciated. Thanks in advance!

Comment0 | Share | Tweet | Share | print | email
Category: Leadership challenge
Disclosure of Material Connection: Some of the links in the post above are “affiliate links.” This means if you click on the link and purchase the item, I will receive an affiliate commission. Regardless, I only recommend products or services I use personally and believe will add value to my readers. I am disclosing this in accordance with the Federal Trade Commission’s 16 CFR, Part 255: “Guides Concerning the Use of Endorsements and Testimonials in Advertising.”